When driving in the city was a breeze, and parking easily available due to fewer vehicles, roundabouts or traffic circles were built to smoothly guide the traffic arriving from different roads onto the junctions. Besides, they were a quiet oasis of green in the centre of noisy traffic. Some circles also had a fountain adding to their charm. Here are some of these traffic circles which most of us Mumbaikars must have passed by at some point in time.
Jacob Circle, situated near Mahalaxmi Station, is commonly known as Saat Rasta as one can access seven different roads from here. It got its name from Sir George Le Grand Jacob, a military General and a scholar who is credited to have transcribed the Ashokan rock inscription in Girnar, Gujarat. There was a fountain in the circle, at present not visible, which was donated by Sir George's adopted daughter. On this circle, we now have a small garden known as the Sant Gadge Maharaj Udyan.
Wellington Circle opposite Regal cinema at the northern end of Colaba was named after the iconic Wellington Memorial Fountain which stands within this traffic island. The fountain was built in the 1860s to honour the memory, and to commemorate the military achievements of the Duke of Wellington. The fountain marks the site where the Duke camped in a tent during his two visits to Bombay in 1801 and 1804. To the east of Wellington Circle stands the Gateway of India, whilst to its north is the Prince of Wales Museum. All those who have shopped at Colaba Causeway must have surely been past this one.

Flora Fountain was once a circular traffic roundabout in Fort with an exquisitely sculpted fountain at its centre. Mumbai's most visible icon is named after the Roman Goddess of flowers whose statue stands atop the fountain. The fountain designed by Richard Norman Shaw was constructed in 1864 from funds donated by Cursetjee Fardoonjee Parekh. It stands at the junction of Veer Nariman Road (formerly Churchgate Street), M. G. Road (Esplanade) and D. N. Road (Hornby Rd). Grand Victorian structures such as the Bombay High Court, The Central Telegraph Office and the Oriental Building envelop this iconic fountain. 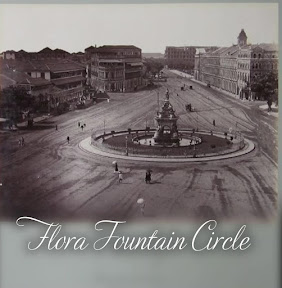 Horniman Circle lies a few hundred meters to the east of Flora Fountain on what was earlier known as the Bombay Green. Before independence, it was known as Elphinstone Circle after Governor Lord Elphinstone. The circle enclosed a garden (and still does) with an ornamental fountain and a bandstand which made it quite popular with the Parsi community. The Asiatic Society and the Reserve Bank of India lie across the road from here. Between Flora Fountain and Horniman Circle stands Bombay's oldest Anglican church, St. Thomas Cathedral.
CP Tank or Cowasjee Patel Tank Circle stands in the Bhuleshwar area at the junction of V. P. Road, Khadilkar Road and C. P. Tank Road. Earlier, a water tank that supplied drinking water to the Girgaum area existed here. Hence the name. The tank was built by Cowasji Rustamjee Patel in 1775-6 making it the oldest tank constructed in Bombay. Once, the city had many water tanks which were a source of water for its residents before piped water was made available.
Haji Ali Circle used to be a large traffic circle with a beautifully designed garden in it. The circle was replaced by a multi-signal junction as traffic increased in the late 1980s. It was located at the meeting point of five roads with heavy traffic: Lala Lajpatrai Marg (Hornby Vellard) from the north, Warden Road from the southwest, Pedder Road from the south, Tardeo Road from the east, and Dr E Moses Rd from the northeast. The Haji Ali Dargah, a mosque and dargah of Pir Haji Ali Shah Bukhari is located on an islet west of this circle. 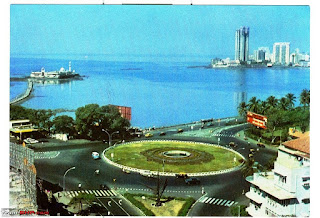 Khodadad Circle in Dadar East was earlier known as Dadar TT as trams coming from South Bombay terminated here. It is named after Khodadad Irani whose sons were developers in this area. Tilak Road and Babasaheb Ambedkar Road meet at Khodadad Circle, over which now stands the Jagannath Sunkersheth Flyover. Agarwal Classes, a much sought after coaching class in the 1970s, 80s and 90s was located just off this circle.
King's Circle, named after British monarch King George V, stands at the junction of Dr Babasaheb Ambedkar Road (formerly Vincent Road) and Bhandarkar Road. Situated around the circle are the many popular South Indian Udupi Restaurants: Cafe Mysore, Cafe Madras and Anand Bhuvan. In 1962 the circle was renamed B N Maheshwari Udyan and true to its name there is a well laid out garden here.
Turner Road Circle. A roundabout at the junction of Turner Road, SV Road and Linking road was known as Turner Road Circle. On one side of this circle was the Esso (now HP) Petrol Pump, and on the other was Coin Tea and the Tata Blocks. This circular patch of green was removed in the late 1960s or early 70s. 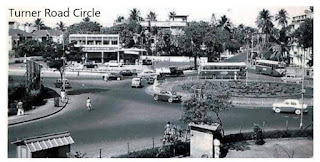 As Mumbai's population and the number of vehicles increased some of these circles had to make way for a modern system of traffic management and sadly we lost some of our city's landmarks.
at April 25, 2021