Today, just as thousands of Mumbaikars are queueing up everyday to get vaccinated for the Novel Corona Virus, a similar situation arose a century and a quarter ago when the city was in the midst of the bubonic plague epidemic.

Like the Corona Virus 2019 or Covid 19, the bubonic plague also is thought to have originated in China where it spread in the mainland before reaching the Chinese port cities in about 1894. From there it eventually reached India via the ships trading between the two countries and was first detected in Bombay in 1896.

Dr. Acacio Gabriel Viegas, a Goan born medical practitioner having his clinic in Mandvi (the area east of Mohammad Ali Road) was the first doctor to have identified the infection as bubonic plague. As the disease spread rapidly taking a heavy toll on lives it was designated as an epidemic. In fear, many fled the city just as we saw an exodus of people from Mumbai in the summer of 2020. Trade and commerce in the city were affected then as they did last year. The textile industry which depended on manpower was grounded. There was fear all around.

Dr. Viegas who had correctly identified this disease quickly swung into action. He launched a campaign to clean up the slums and chawls and to rid the affected areas of rats. It helped that besides being a medical practitioner, Dr. Viegas was also a Municipal Councilor. Besides these initiatives, he also continued to tend to patients at great personal risk.

Meanwhile, the government sought to reconfirm Dr. Viegas' diagnoses with other experts and once it was established that it was indeed the bubonic plague, it lost no time in inviting the Ukrainian bacteriologist Dr. Waldemar Haffkine, then stationed in Calcutta, to Bombay. Dr. Haffkine who had earlier formulated a vaccine for Cholera was asked to develop one for the plague. He got to work in a makeshift laboratory set up in the corridors of the Grant Medical College. His approach to finding a solution to conquer the infection was through preventive inoculation. He studied the infected rats and extracted the bacteria which was then allowed to grow before being weakened by heating. This weakened bacteria would then be inoculated in an uninfected human which in turn would produce antibodies in the body needed to fight the bacteria.

Finally, when the vaccine was ready Dr. Haffkine tried it first on himself. However, not all were convinced and there was another hurdle to overcome before mass vaccinations could begin. Many people were not convinced of its efficacy, some due to religious superstitions, and thus finding volunteers for clinical trials proved difficult. So, prison inmates were roped in and after trials on them and some volunteers, the vaccine was ready for use on the general public.

Here again, the good Dr. Viegas played a pivotal role by vaccinating about 18000 people himself. By 1902/3 about half a million people were vaccinated which is a considerable number given the demographics and the reach of the day. Sadly, despite the efforts of the government and individuals alike, about 50000 people died in Bombay alone. Many more, especially amongst the working class, fled the city thus severely crippling the economic activity. The scene then held a mirror to what we have experienced in the past year. 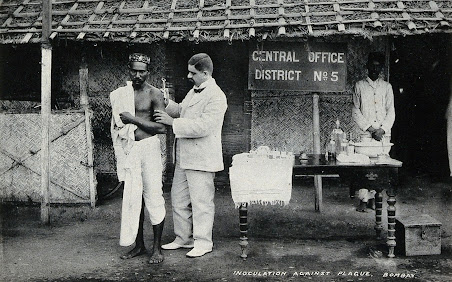 For the government of the day, the priority was not only to find a cure but also to contain the spread of the plague. And measures quite similar to the ones we are experiencing now were enforced by the authorities. Pilgrimage to Mecca was prohibited and so was emigration from India, railway bookings stood cancelled, religious gatherings were banned and a strict check was kept on essential commodities to prevent hoarding. Further, to check the spread orders were issued to separate the infected from the healthy. And those who were in close contact with the patients were quarantined.

However, all this did not go as smoothly as envisaged. Overzealous British officers and soldiers often behaved rudely and forcefully with the general public as well as with patients. To compound this, arrangements at the hospitals and quarantine camps were found to be substandard. The government's heavy-handed approach caused much public discontent which took a turn for the worst when in Poona the Chapekar brothers shot dead that city's Plague Commissioner, Walter Charles Rand accusing him of inconsiderate and highhanded behaviour.

The bubonic plague finally petered out by 1905 but not before taking a heavy toll on the city and its inhabitants. However, this black swan event made the authorities sit up and take notice of the pathetic living conditions in many poorer areas of the city. Consequently, the Bombay City Improvement Trust was created to upgrade the sanitary and living conditions in Bombay.

Gratefully, the heroes of the day were not forgotten. Dr. Viegas went on to become the President of the Bombay Municipal Corporation in 1906. After he died in 1933, a statue honouring him was built which still stands opposite Metro Cinema at Dhobi Talao, and a street in Chira Bazaar is named after him. As for Dr. Waldemar Mordecai Haffkine, the country's first biomedical research institute is named after him. The British Government whilst recognising his efforts awarded him the Companion of the Order of the Indian Empire (CIE) in 1897. The Indian Government too honoured him with a postal stamp in 1964. 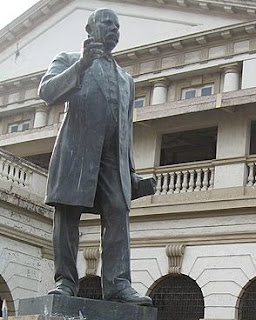 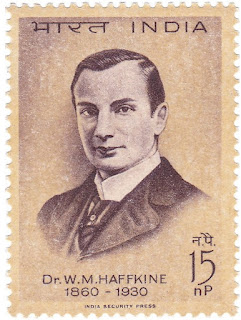