In the aftermath of cyclone Tauktae which hit Mumbai on the 9th / 10th of May, it was noticed that many of the trees uprooted were not native to Mumbai.

Before Bombay became India's financial and commercial capital, it was a cluster of seven islands with fishing and agriculture as the main occupations. Many areas on these islands were forested and were home to a wide variety of flora and fauna. Prior to the new species of plants and trees that were introduced, first by the Portuguese and later by the British, the green cover was made up of local or native plants and trees such as Pimpal, Hirda, Coconut, Amla, Tamarind, Mango, Bor, Fanas, Champa, Bakul, Saag, etc. As the soil here suited these trees, they could take root more firmly and thus resist the high-velocity winds that normally accompany cyclones and storms.

Here is a brief look at some of these native trees which have lent their names to streets and areas in Mumbai.

Fanaswadi in Kalbadevi is known for its temple devoted to Lord Venkateshwara. Fanas in Marathi means Jackfruit and the name Fanaswadi indicates a time when the Jackfruit trees grew abundantly here. These trees are well suited to tropical regions. With a relatively short trunk encased in smooth reddish-brown bark, they bear large oblong fruits which can weigh up to 50 kgs. The yellow coloured fleshy petals that grow inside the fruit are sweet, and along with the kernel inside it, are used in South Asian and Southeast Asian cooking. 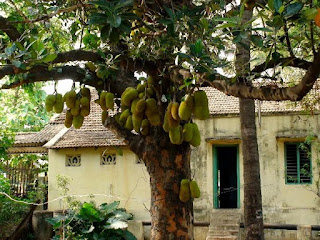 Chinchbunder and Chinchpokli are areas that derive their name from the Chinch or Tamarind tree which once were numerous on these islands. This tree is reported to be indigenous to tropical Africa but has been growing on the Indian subcontinent for so long that it is considered a native here. Surprisingly, the name Tamarind is said to be a corruption of the Arabic word "Tamar-al-Hindi", meaning Indian date. The tree produces a brown, pod-like fruit that contains a sweet, tangy fibrous pulp that is used in cuisines, especially in chutneys and condiments, in many parts of the world. Besides, this pulp has medicinal properties too. And in many Indian homes, it is also used to polish utensils. As with most tropical trees, the Tamarind grows well in the sun, rising to a height of 40 to 60 feet. Besides fruit, the tree also sprouts red and yellow flowers and evergreen coloured leaves that fold at night. 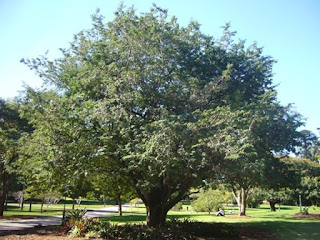 Borbhat lane in Girgaon is a reminder of the Bor or Indian Jujube trees that were once here. A popular fruit with school children, the Bor or Ber as is known in the north, is red in colour with a prominent round seed-bearing stone encased in its wrinkled skin. The tree itself is not very tall but quite hardy and can cope with rainy as well as dry conditions. It grows quickly and can produce fruits within 3 years. An unusual trait here is that the fruits ripen at different times on a single tree. The fruits, at first green, turn yellow and finally red as they ripen, and have a sweet-sour taste. A single tree can produce between 5000 to 10000 fruit a year! Besides fruit, the tree also bears tiny yellow flowers. 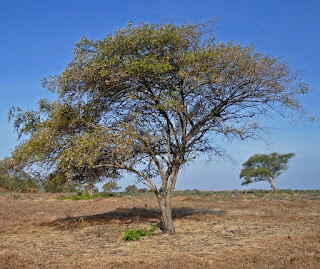 Champa, a popular and well-known flower in India has a street named after itself in Mumbai's Zaveri Bazaar precinct - Champa Galli. The popularity of this flower is not restricted to India alone. Champa is the national flower of Laos where it is called Dok Champa. Speaking of the tree, it is deciduous, meaning it sheds its leaves annually and has been widely cultivated in subtropical and tropical climates where it is a popular garden and street plant. It grows as a spreading tree to about 23–26 ft high and is flush with fragrant flowers which besides being used in garlands and as a hairdo, are also offered in temples and religious rituals. These sweetly scented flowers are white with a yellow centre though now hybrid varieties yield different colours. 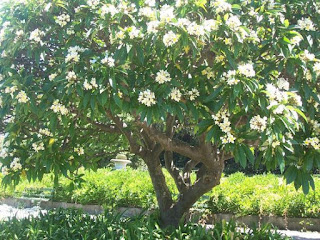 Tardeo, an area in central Mumbai similarly gets its name from the Tad tree or Toddy Palm which is commercially exploited for its sap. The sap when fermented produces Toddy wine or Tadi, a mildly intoxicating beverage that was popular with the original natives of the erstwhile seven islands. The tree, which has a trunk like a pole and fan-shaped leaves, also produces a fruit locally know as Tadgola. It is a soft fruit resembling a wobbly ice-ball that is a natural thirst quencher and a great summer cooler. 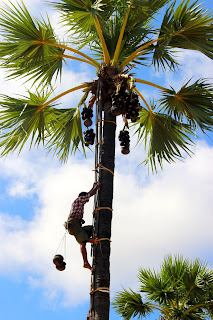 Now, with Brihanmumbai Municipal Corporation deciding to plant native trees in the city, especially in place of those uprooted in the recent cyclones, Mumbaikars can look forward to fewer tree falls during the monsoons and cyclonic storms.