This is where it all began.

On 16 February 1665 in a room in Manor House, now known as Bombay Castle, the seven islands that we today know as the Island City of Mumbai were officially handed over by the Portuguese to the representatives of the English crown. And with this dawned a new era of development, growth and prosperity of Bombay.

The first Englishman in charge of Bombay was Humphrey Cooke, thus making him the first Governor of  Bombay during the short-lived rule of the English Crown. Cooke left office in November 1666 and subsequently, following friction between the  King's agents and the Portuguese over port dues, King  Charles II handed over these islands by a royal charter dated 27 March 1668 to the East India Company for an annual rent of £10 in gold and a personal loan of £50,000 at 6% interest per annum.

This paved the way for the President of the Council of Surat factory, Sir George Oxenden to become Governor of Bombay. Sadly, Sir George did not live long and passed away in Surat in 1669. However, for Bombay, this sad turn of events was a blessing in disguise. Oxenden's successor, Gerald Aungier was a man of vision. It was he who laid the basis for the commercial, administrative and social expansion of this city. And the subsequent developments that led to this change took place in the area we know as Fort, Bombay 400001.

If trade and commerce were to grow, money would be required, and with that in mind Aungier set up one of the oldest surviving mints in India to mint Rupees, Pies and Bajruks in 1672. It exists today as the India Government Mint and is located behind the present RBI tower. 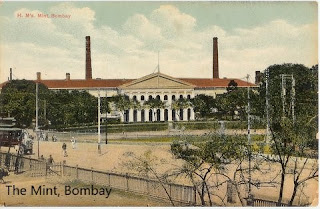 To ensure law and order a Court House and prison were set up in 1676 at the junction of Gunbow and Bora Bazaar Streets. Later, the court moved to the Admiralty building in Apollo Street before moving to its present location overlooking the Oval. Earlier in 1672, Portuguese laws that were in force on these islands were abrogated and replaced with the English system of justice. 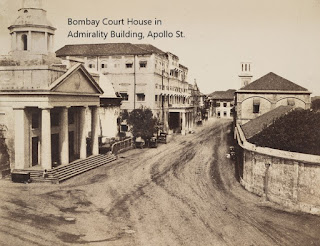 Even the health of the denizens was not overlooked. A small hospital was built in 1677 at the site where St. George Hospital stands today. But most importantly, and unlike the Portuguese, Aungier assured immigrants the freedom of worship thus encouraging people of all faiths, especially from the trading communities, to settle in Bombay.

Gerald Aungier's good work was followed up by Charles Boone who became governor in 1715. The fort walls which lent the area its name "Fort" came up during his tenure, thus securing the city from military attack. Also, during his tenure, St. Thomas' Cathedral was opened for worship on  Christmas day 1718. Earlier prayers were held in a room in  Bombay Castle, the then residence of the Governor. Besides being a place for prayers, the church was also "point zero" from where all distances in Bombay were marked.

As maritime trade now shifted from Surat to Bombay, the dockyard was extended. Parsi shipbuilder Lavji Nussarwanji Wadia was invited from Surat to build new vessels for the EIC. This dry dock was beyond where the Lion Gate stands today and the tradition of shipbuilding still continues at the Mazgaon Docks.

With the town within the fort walls making rapid progress, important civic measures were taken. A town scavenger was appointed in 1759 to oversee the sanitation. Markets were built; a native market near Bazaar Gate and a market for Europeans at Medows Street / Nagindas Master Road. A police force known as the Bhandari Militia was set up and magistrates of Police were appointed to enforce law and order. Lt. James Todd was appointed the first Lieutenant of Police on 17th February 1779 by Governor William Hornby making Mumbai Police one of the oldest police forces in the country. The Police Office was situated in Fort with the court of the senior magistrate of Police located in Forbes Street, now known as V B Gandhi Marg. 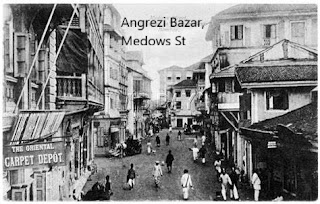 In 1770, a group of theatre aficionados came together to propose the establishment of an amateur theatre and by 1775 were able to raise a public subscription for the same. The government too supported the idea with a grant of land on the Bombay Green. Thus, a Play House known as the Bombay Theatre came up in Fort and was one of the earliest English theatres in India. Sadly, the theatre fell out of favour with the public as well as the government, and was closed and later demolished in the 1840s. Today, the Nanji Building housing the Bank of Baroda stands in its place. 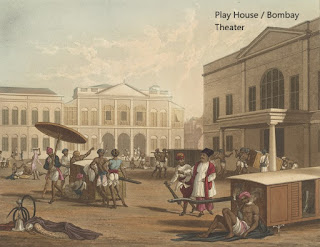 Adjacent to the Play House was the Fire Station, a forerunner to our city's Fire Brigade. It began as a horse-drawn service and played its part in the Great Fire that engulfed the town in 1803.

In 1811 the idea of having a Town Hall was first mooted. Its purpose was to offer the residents a platform to discuss, debate and speak on local and regional issues, matters of education, literature and art, and those relating to the governance and betterment of the city. The construction of the town hall began in 1821 and was completed in 1833. Nowadays, the Town Hall is better known for its occupants, namely the Asiatic Society & Library and the Stamp Office. Besides, its grand steps that lead to the main hall are quite popular for photoshoots and as a landmark meeting place. 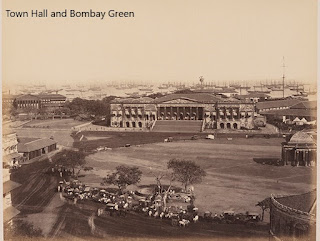 The Play House, Fire Station and Town Hall were all located at the periphery of an open ground known as the Bombay Green. This circular piece of real estate served as a venue for military bands and parades, a meeting place for the general public, a market for traders to transact business, open storage for commodities, and also a place of rest and recreation for the people at large. Later, when the Fort walls were demolished in the 1860s during the governorship of Sir Henry Bartle Frere, a circular garden surrounded by neo-classical buildings came up here. This garden was named Elphinstone Circle in honour of Governor Lord Elphinstone and post-independence renamed as Horniman Circle after Benjamin Guy Horniman. Horniman was a British editor of The Bombay Chronicle, a newspaper that supported India's struggle for independence. This paper was published from a red brick building, which still stands at the western edge of the circle and is home to the country's oldest surviving newspaper, Mumbai Samachar which started as weekly way back in 1822.

Outside the Elphinstone Circle, under a banyan tree, a few brokers began speculating in cotton futures and shares of textile mills that had come up in Bombay since 1854. Later, they organised themselves as the Bombay Native Share and Stock Brokers Association which in 1875 went on to become Asia's first stock exchange, now known as the Bombay Stock Exchange or BSE.

With the area acquiring a commercial overtone, financial institutions set up their office here. The Bank of Bombay, which upon its merger with the Bank of Madras and the Bank of Bengal became the Imperial Bank and subsequently the State Bank of India, set up its head office across from the Elphinstone Circle on Apollo Street. Later, as other Banks followed suit, the lane behind Apollo Street was named Bank Street. 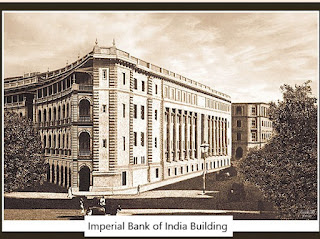 Another significant event associated with Fort was the departure of the first train in India on 16th April 1853 from Bori Bunder, located outside the Bazaar Gate. Later, in 1878 the foundation was laid for the construction of a grand train terminal, Victoria Terminus, now renamed after Chhatrapati Shivaji.

After the fort walls were demolished, new areas outside the fort opened for development. The Bombay University, Bombay High Court and the city's first, and one of the country's earliest luxury hotels, the Watsons Hotel came up on the Esplanade that overlooked these walls.

With these signal developments and the establishment of veritable institutions in this area Bombay raced ahead of Calcutta, then the capital of British India, to emerge as the Urbs Prima in Indis, meaning the First City of India.

No wonder, the Fort precinct occupies the foremost spot in Mumbai's postal code index as 400001 and is designated as A Ward by the BMC.