Much before movies with sound became the norm action movies were very much part of the silent era. As the saying goes, action speaks louder than words. But if there is someone best remembered for thrilling and awe-inspiring action scenes in early Indian cinema, it was Mary Ann Evans, better known as Fearless Nadia.

Born in 1910 in Perth, Australia to Scotsman Herbert Evans and Margaret, she spent her early years in Peshawar where she learnt to hunt, fish and shoot.

But before she became an action star, Mary Evans performed in Zacko’s Russian Circus. Later, she joined Madame Astrova’s ballet group which was touring the Asian subcontinent, doing live shows between silent films for British and Indian troops. She changed her name to Nadia after being advised by a fortuneteller. And ‘Fearless Nadia’ was a carry forward from her days as a circus acrobat.

Fearless Nadia burst onto the Indian screen in the 1930s brandishing whips, swords, guns and sometimes battling villains with her bare hands.

Her career in Hindi movies began as a chorus girl in a Wadia Movietone film. But the movie that launched her career in Hindi films was the 1935 stunt movie Hunterwali starring herself as a brave princess. Portrayed as ‘the protector of the poor and punisher of evildoers’ she was presented to the public as Fearless Nadia, a name that stuck to her for the rest of her film career. Much to the acclaim of audiences, as a masked heroine she battled soldiers, rode horses, jumped over a moving cart, fought with the bad guys on the roof of a train, all to defeat the villain. There was also a rare scene in Hunterwali of Nadia bathing nude in the river, something that was far ahead of its time but was cleared by the British censors. 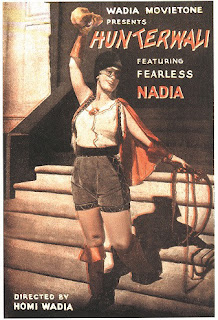 With Hunterwali a great success, Wadia Movietone signed her up for more movies of a similar genre, some of the notable ones being Miss Frontier Mail (1936), Hurricane Hansa (1937), Lutaru Lalna (1938), Punjab Mail (1939) and Diamond Queen (1940). These movies not only enthralled the audiences but also changed the image of a woman on the screen. As a blonde, blue-eyed girl with Indian names such as Madhuri (Hunterwali), Savita (Miss Frontier Mail) and Madhurika (Diamond Queen), she championed the common man’s cause and fought for women’s rights, something unheard of and unseen in those pre-independence days. In Diamond Queen, she echoed this sentiment with the dialogue, ‘If India is to be free, women must be given their freedom. If you try and stop them, you’ll face the consequences'.

In an era when stunt doubles were unheard of, she used to perform the stunts herself. Many a time, she performed stunts that men were afraid of doing. And most of these stunts were shown as performed, without the use of trick photography. These dare-devil acts characterized her own brave and carefree spirit.

Her usual co-stars in these films were Master Mohammed, Atish Sayani, John Cawas, Boman Shroff, Jaidev (who later on went on to become a music composer), and a horse named Punjab ka beta. Whilst Mohammed played the role of an elder to Nadia, Atish Sayani was the villain, Jaidev in a supporting role and Boman Shroff or John Cawas played the hero and her love interest. But her real love interest in life was her director Homi Wadia whom she married in 1959 after a long-standing relationship.

After starring in more than 50 films she retired and, in true Fearless Nadia style, she took to breeding racehorses.

She passed away in 1996, her later years spent enjoying domestic life.