Hellaro
Once in a while comes a movie that moves you, enthrals you. Hellaro, meaning outburst, is one such movie.
This little-known Gujarati film won the Golden Lotus award for the best feature film from across languages.
Inspired by the folklore of Vrajvani village in Kutch and real-life instances of patriarchy, the movie is set in 1975 in a small, distant village in the arid Rann of Kutch. The social drama revolves around the lives of women in a highly patriarchal, casteist and superstitious society. The arrival of a new bride from town and a chance discovery of a Dhol player in the middle of the desert creates a seismic shift in the lives of these rural women. Departing from their daily mundane chore of collecting water from a distant waterbody, the women give expression to their repressed emotions through Garba, the traditional Gujarati dance form, to the beat of the Dhol. 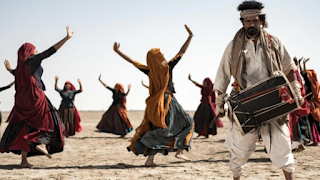 Authenticity is the hallmark of this film. The village set-up, the clothes and the verbal, as well as the body language of the actors, gives the feel of real-life experience. It transports you 'there'. No over-the-top performances associated with Gujarati cinema here. Neither are rustic Kutchi-Gujarati dialogues a deterrent due to English subtitles.
The direction, production, and cinematography are praiseworthy. It can truly be said that the film questions patriarchy and superstition while celebrating the colours and traditions of Gujarat.
No wonder Hellaro won the National Film Award for Best Feature Film at the 66th National Film Awards making it the first Gujarati film to do so. Hellaro has also been selected as the opening film in the Indian Panorama at the 50th International Film Festival of India.
On the whole, a thoroughly enthralling film. A must watch.
at December 07, 2019